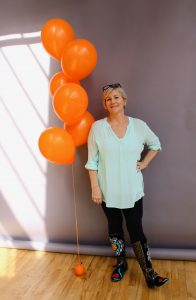 Ruth has developed, managed and implemented highly successful traditional and social media campaigns locally, nationally and internationally. She brings extensive media experience to her role at AHA. A former journalist, she has written for many national publications including Maclean’s, The Globe and Mail, Canadian Business, Metro Newspapers, Chatelaine and Flare. What this also tells you is that she can write.

Ruth’s ability to think creatively and act strategically is a powerful combination of skills that provides a strong foundation for the work done by AHA Creative Strategies.

Ruth has spent close to two decades immersed in online communication. As the former director of communications at Vancouver Film School, she was instrumental in the launch of the internationally recognized post-secondary institution’s New Media program (now called Digital Media). As a specialist in this exciting and ever-evolving area, Ruth balances a never-ending curiosity and interest in what is new and innovative online with a strategic approach.

Ruth is also considered one of the West Coast’s strongest communicators in sensitive subject matter, issues and crisis communication and brand reputation. Her social media expertise serves our clients well in this area.

An in-demand speaker, she has presented to small and large groups in the Lower Mainland, across Canada and in New Zealand, including a TEDx Talk.

In her spare time, Ruth is writing a trashy novel and loves to travel, cook and hang out with her two rescue mutts, Sassy and Chalupa.

Paul’s expertise in corporate communications provides AHA’s clients with a solid and well-thought-out approach to each facet of an event, project or campaign. With his editor’s attention to detail, analytical mind and strong commitment to exceeding expectations, Paul adds value to each project. A critical thinker, he examines every angle of a plan to ensure that each tactic being used will meet the specific objective of the initiative. This means that it can feel like he is nagging, but what he is really doing is making sure that the work we do for our clients is done exceptionally well – and generates results. It is because of Paul that we exceed expectations on a regular basis. (At the end of the day, we all greatly appreciate his attention to detail!)

Paul brings a business perspective to creative projects, which allows the team at AHA Creative Strategies to provide strategic communications services to our clients, while working within the budget and other organizational constraints. Paul’s project management skills are exceptional.

Charlotte Empey, Principal at FYI Media and the Toronto Bureau Chief for AHA Creative Strategies, partners with clients to create powerful narratives that inspire, move and motivate. She helps to define communications goals and objectives, and to identify the audience psychographic – key to understanding who they are and what kinds of stories will move them most. She then develops a strategic plan and manages a team of cross-platform professionals to create stories that cut through the clutter and capture hearts, minds and the collective imagination.

Prior to launching FYI Media and taking on the role of Toronto Bureau Chief at AHA, Charlotte held the position of Editor-in-Chief of Metro. Charlotte managed seven daily newspapers across the country and their associated websites, serving 15 major markets. Prior to this role, she was Editor-in-Chief of Canadian Living magazine for seven years as well as Editor-in-Chief of Homemakers magazine, where she was responsible for redefining the editorial content of both brands, over all platforms, including print, digital and broadcast. Charlotte was the Founding Editor of Modern Woman magazine and has held senior positions at Chatelaine and Flare magazines, in advertising as a creative director at MacLaren Advertising (now MacLaren McCann), and in academia as Associate Dean, School of Creative and Performing Arts at Humber College.

Laurie Hanley obtained her BA at the University of New Brunswick, with a major in Psychology, a minor in Spanish, and extensive study in French. She followed this up with the obvious – a Certificate of Excellence in Acting for Film and TV at Vancouver Film School. (Here, her incredible work ethic and always positive, “go the extra mile” attitude caught the attention of AHA partner Ruth Atherley, who was director of communications at the school at that time.)

Laurie’s work experience is as varied as her studies, with a constant theme shining through: each job has required a strong work ethic, excellent people skills and fine attention to detail. What this says about Laurie is that she is the perfect person for AHA. No day with AHA is ever the same – and she is always ready to roll up her sleeves and figure out what needs to be done – and gets it done well, on time and on budget. Laurie has a natural ability to think outside the box and to quickly adapt to fresh surroundings, which serves her well in her work. She applies these skills in her daily life and on everything she works on at AHA.

A key member of the AHA Creative Strategies team for close to a decade, Laurie is an experienced researcher, copyeditor and proofreader. As content creation has become a larger component of an overall communications strategy, Laurie has stepped deeper into this role – supporting AHA, as we have become a go-to content provider, writer, editor and proofreader for a range of exceptional organizations in diverse industry sectors.

Her passions in life include her family, her work, all things film-related, and cooking with eggnog. Laurie currently resides in beautiful Halifax, Nova Scotia. She commutes to the AHA Vancouver office virtually.

Maryse is an enthusiastic PR practitioner and lecturer, with close to 20 years in the industry. She has worked on communications campaigns in Asia, Europe and North America for a multitude of clients including Celestial Seasonings, Toyota, News Corporation and the United Nations.

Maryse is the co-founder of the (now closed) award-winning PR agency Turtle & Hare Creative. She lived for several years in Tokyo where she worked for the Japanese partner of the Worldcom Group, a consortium of PR agencies worldwide. Maryse also conducts regular seminars and workshops on communication, media training and media relations for corporate clients and non-profit organizations. She has taught PR at Simon Fraser University, Kwantlen Polytechnic University, BCIT and Langara College.

Maryse is fluent in French and acts as AHA’s French-language communications strategist and writer.

Maryse has a degree in journalism from Concordia University and has earned her Masters degree in Mass Communications from the University of Leicester. She is committed to serving her local community and has supported several local organizations over the years including the Cinderella Project, Volunteer Vancouver, the Children’s Hospital, A Loving Spoonful, The Canadian Mental Health Association, the Vancouver Fringe Festival, and the Alliance for Arts and Culture.

Maryse loves spending time with her charming, smart and funny daughter, and travelling with her husband on their tandem bicycle, snorkelling, writing, and practicing yoga and meditation.

Danielle is a consummate professional with the ability to balance all elements of the demanding, tight-deadline, high-pressure role of a strategic communicator. This includes providing leadership and support to a team, rolling up her sleeves and getting the job done (no matter what the challenges), and engaging with the C-Suite and other senior executives.

After more than a decade in the public sector, Danielle recently opened Creative Communications Strategies, a marketing and communications firm and a strategic partner with AHA Creative Strategies.

The former manager of communications services for the Capital Regional District, Danielle has extensive media relations and community engagement experience, which is invaluable to AHA clients. Danielle has an instinctive ability to see an idea, opportunity or issue from the perspective of all stakeholders or community groups and offers valuable insight into which approach or specifics would be of most interest in generating their attention.

When she isn’t working, she can be found seeking out adventure – near and far – with her two little girls and her fiancé.

Noelle Nikas is a Vancouver-based, award-winning photographer. Noelle’s specialty is capturing the authentic personality of the individuals she photographs. She has the ability to create corporate photos that showcase the character, qualities and unique charm of the person. No stiff poses or blank stares – the work that Noelle does proves the old adage: A picture is worth a thousand words.

When she isn’t working with AHA, Noelle photographs families, couples and children. Her exceptional ability to take the energy, love and charisma from her subjects to the photograph has won Noelle a place as one of Vancouver’s top 50 family and portrait photographers by VancouverMom.ca.

Noelle took most of the photographs showcased on this website (excluding the blog).

The AHA team has had a long-term relationship with Brodeur Partners, a highly-respected global public relations agency.

Strategic communications in the age of social media.